When the National Trust acquired Beningbrough Hall in 1958 it was agreed by the government that the house would be accepted in lieu of death duties. As the property was without endowment much of the collection was sold off leaving the grand baroque house sparsely furnished. At the sale auction and over time the charity acquired some pieces that are significant to the history and understanding of the house and its previous owners. Among these items were state beds; Beningbrough is lucky to have not one, but three!

Link to the Chesterfields

Two of the state beds came to Beningbrough through Lord and Lady Chesterfield who moved into the house in July 1917 bringing with them pieces from their former estate, Holme Lacy. Although the state beds are not original to the house, they are of the same period and reflect a similar baroque design. Lady Chesterfield was the last private owner of Beningbrough, enjoying rural Yorkshire life on the estate until her death in 1957; her husband had passed away in 1933.

The building of Beningbrough Hall was completed in 1716 in the modern style of the period: baroque. This was also an exciting period for furniture makers and upholsterers. During the eighteenth century many Huguenot craftsmen moved to England fleeing religious persecution in France. Two of these craftsmen included Francis Lapierre and Daniel Marot who arrived in around 1685. Craftsmen such as Lapierre and Marot brought to England the styles of the French court and nobility; although by the time they settled in England the designs in France had grown ever more lavish and the beds created in England can be viewed as a less ostentatious version of the French baroque bed.

It is believed that at least one of the state beds at Beningbrough was created by Lapiere and all three were inspired by the style of Marot. We do not how much the bed would have cost however similar beds were made by Lapiere for the Duke of Devonshire and William III. In 1697 the Duke of Devonshire paid £15 for the woodwork and £470 for the upholstery of a state bed, this might not sound much but was a considerable cost at the time and the equivalent to furnishing a whole house!

The larger red state bed is believed to have been created for Viscount Scudamore in circa 1710. The bed is upholstered with crimson damask silk and features a corniced tester and a fringed and braided headboard which displays the Viscount Scudamore’s coronet. It is currently situated within one of the state apartment rooms that were reserved for distinguished guests.

The blue bed has a floral decorative style and upstairs in the space used by Lady Chesterfield as a bedroom is another slightly earlier red state bed. This is believed to date from the 1680s and is styled with crimson silk damask, an elaborate carved tester and a moulded cornice. The headboard showcases an embroidered panel with scrolls, shells, a scallop and tassels. This bed has received a great deal of care and conservation to help preserve it for the future.

More than changing the duvet

Before the beds passed into the possession of the National Trust, they were restored and repaired in 1928 by Lenygon and Morant and in 1979 by Anne-Marie Milinaric. The beds are surveyed by a specialist conservator who makes recommendations on how they should be cleaned and cared for. Due to their age and fragility, they can only be cleaned every three to five years, however the bed covers can be cleaned once a year as they were replaced in the twentieth century and therefore are more robust than the rest of the bed. Caring for the beds is something that we do in rotation, they typically have more than 20 components and by the time we have cleaned the last bed, it is time to clean the first bed again!

Tools of the trade

Our kit for cleaning the state bed includes a museum vacuum, so the suction can be controlled, micro tool brush attachment and a goat hair brush. We wear gloves to protect the bed and masks to protect us from breathing in dust.

Before the bed is cleaned, we carry out an inspection to look for any areas of damage or evidence of pests. Our findings are recorded in a condition report and compared to previous reports to assess if there have been any changes in the condition of the item.

Detailed photography is used to record and allow for comparison over time. Cleaning is from top to bottom and varies depending on the part of the bed. The crevices and headboard are brushed with goat hair brushes to dislodge any dust and a monofilament net covers the nozzle for the more delicate areas to prevent fibres and threads being pulled.

When the area is closed the bed is covered in acid free tissue paper and then a made to measure cover to limit light exposure. Literally putting the bed to bed and on to the next piece in the collection.

Please note, the hall and bedrooms are currently closed due to social distancing regulations. 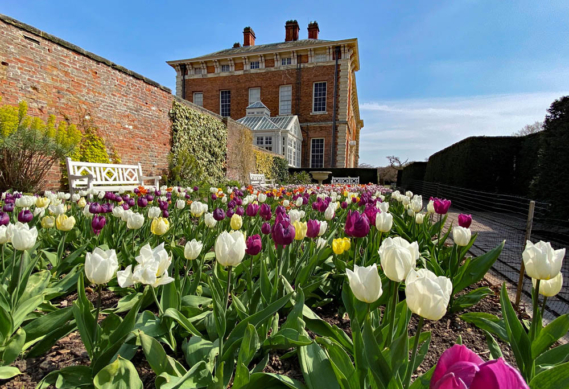 Beningbrough Hall, on the outskirts of Harrogate, with its eight acres of gardens is a real treat to enjoy all year round. Outside, you can explore the beautifully arranged formal gardens, several herbaceous borders, less formal areas managed for wildlife as well as sweeping lawns. There are many perfect spots for a picnic and visitors return time after time to watch the seasons changing when different plants are at their best. Please note: The hall...

Today This week This month

Christmas 2020 in Knaresborough will be celebrated with creativity, beauty and seventy decorated trees as part of the annual...

The beautiful Himalayan Garden and Sculpture Park is currently closed to the public but its teams of skilled gardeners...