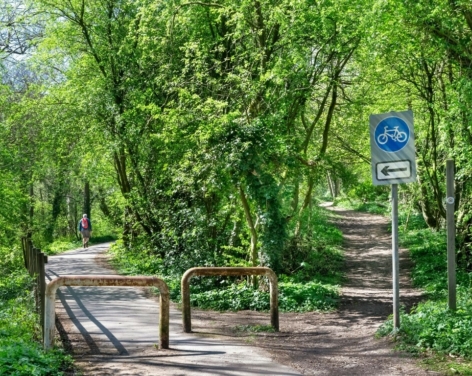 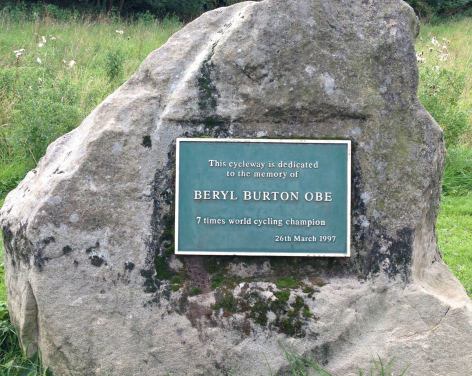 This fully surfaced cycle path connects Knaresborough to Harrogate and beyond, connecting to the Nidderdale Greenway which goes to both Ripley, and the centre of Harrogate.The cycleway offers an alternative to the often busy A59 and is not only traffic free, but picturesque as it passes fields and woodland.From Knaresborough the Beryl Burton cycleway is joined by the River Nidd, over the bridge from the Conyngham Hall Car Park.  It is this entrance that is marked on our map.The cycle way peels away from the river bank to cross open fields and emerges in the area of Bilton, where cyclists can either turn right to continue to Ripley, left to travel to Harrogate Town Centre.Beryl Burton, Champion many times over.The cycle way is named after 7 times World Champion cyclists Beryl Burton who raced for Knaresborough Cycling Club.  Burton was a giant in women’s cycling through 50s and 60s, and continued to take medals and titles right into the late 70s.Through her career Burton won scores of titles both nationally and internationally, and was Road Time Trials Councils Best All-Rounder for 25 consecutive years, up until 1983.She also set a world record for the 12 hour time trial in 1967, beating the men’s record by .73 miles.  Burton raced at the same time as the men’s rider Mike McNamara made his attempt.  The story goes that Burton not only caught and overtook McNamara, but was kind enough to offer him a Liquorice Allsort as she did so, which he accepted.It would be another two years before the men’s record world beat Burton’s own record which stood for an astonishing 50 years until Sept 21st 2017.Despite the near endless list of accomplishments that Beryl Burton accumulated through her career, she remained an amateur, riding with her local club despite being offered at least one professional contract.As well as this cycleway, Beryl Burton is commemorated in the Knaresborough Windows.She was an OBE, and in 2009 was inducted into the British Cycling Hall of fame. Read more

Something amazing is happening at Ripon Cathedral this summer

Something amazing is happing at Ripon Cathedral this summer Thousands of beautiful, white, paper angels are being created and...

Harrogate's Mercer Art Gallery, hosting prestigious exhibitions that are free for everyone

From February 16 until Jun 2 there will be an exhibition of “Linescapes” by Ian Mitchell. These bold digital...

Make Harrogate's gardens the highlight of your summer, whether you visit us for a day, a weekend or longer...