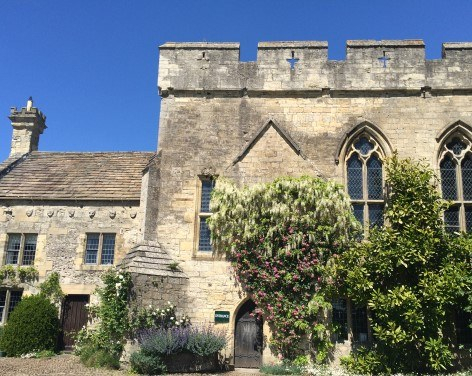 Open by appointment for guided tours between April and October. Please enquire if you would like to visit outside of these times, or see our website for confirmed dates and to book tickets.
Markenfield Hall – tucked privately away along a mile-long winding drive, just three miles south of Ripon, has been described as Yorkshire’s best-kept secret. Not visible from the road, a glimpse of the imposing east wall cannot be seen until visitors reach the old Mediaeval road near to the top of the drive. But for a quirk of fate – and a turnpike act of 1777 – Markenfield would be one of the most recognisable houses in Yorkshire and the nearby A61 would run along this now-Bridleway just 100m from its façade.
As it is, the house is approached from the A61 Ripon to Harrogate Road along a humble farm track, past agricultural buildings and farm workers cottages. Parking at the side of the moat, visitors approach the building on foot – walking over the bridge that now serves the house in place of the former drawbridge – and the moment the Mediaeval Courtyard opens up as visitors pass beneath the Tudor Gatehouse never fails to astound.
The earliest part of the house was built circa 1230, with its Undercroft consisting of the three surviving vaulted rooms ground floor rooms on the east side of the house. This earlier house was massively enlarged by Canon John de Markenfield, who received the Licence to Crenellate the Hall on 28 February 1310 resulting in the distinctive outline that you see to this day.
The Markenfield family owned the Hall until their fateful involvement in the Rising of the North in 1569. The Rising was quashed and the then owner Sir Thomas Markenfield fled to the Low Countries. The Hall and its surrounding farmland were confiscated for High Treason and from that day until 1761 the Hall became a tenanted farm with an absentee landlord.
The house was bought – and essentially saved – in 1761 by Fletcher Norton, the first Lord Grantley of Markenfield (a title still held by the family). At a time when it was quite fashionable own a ruin, Norton replaced the roof of the Great Hall ensuring that the house was watertight and structurally sound once more.
In 1980 7th Lord Grantley began the restoration of Markenfield – turning it from a cold and draughty farmhouse in to the much-loved family home that visitors see today. He died in 1995 and six years later his widow married the writer Ian Curteis. Together, they are continuing the restoration.

See How our Gardens Grow - Winter

RHS Garden Harlow Carr is at its most magical as low light levels and frosts highlight its natural shapes...