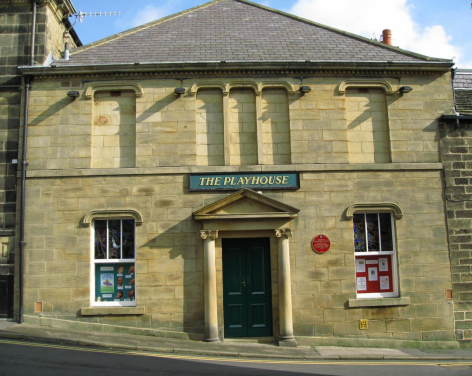 A historic playhouse with a fascination history which now is now home to the Pateley Bridge Dramatic society, who have consistently received plaudits for their productions.  The playhouse sees a range of new and local works alongside stage classics and an annual pantomime.The playhouse can seat 73, giving all performances an intimate and up-close feel, which the players of the dramatic society frequently use to their advantage.As well as occasional guest performances, the local group will typically stage three productions through the year in late spring, early autumn, and the pantomime during February half term.A Building with HistoryThe building which is now the Playhouse began life as a Primitive Methodist Chapel in 1859. When the Methodists united as part of a national policy in 1933, the congregation transferred to the Wesleyan Chapel on Ripon Road.After 3 years the Salvation Army bought the building and was highly successful for some time, but by the late fifties the congregation had dwindled to a few old ladies, and the officer was withdrawn to Harrogate.The empty building was subject to flooding as a beck ran under the floor; as a result the pews and furniture were beginning to rot.Pateley Bridge Dramatic Society resolved to buy the building, but had only £30 in their reserves. A purchase price of £125 was finally agreed on – a seemingly absurd figure, but at the time, property values were very low in the area, and the building was in a degraded condition.Also in the Society’s favour was the fact that the vendors wished the building to be used for a community purpose rather than converted to a supermarket, bingo hall, or bookies, for which purposes several approaches had already been made and declined.The homely feel to the playhouse is the result of considerable work and fundraising by the Pateley Bridge Dramatic Society, and has resulted in them having a wonderful theatre for the many years that followed.For coming productions please see their Future Productions page. Read more

The team at RHS Garden Harlow Carr has been very busy during this lockdown period, getting on with as...