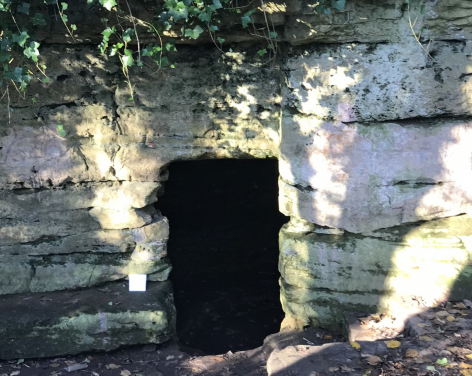 The remains of St Robert’s Cave and chapel are a rare example of a medieval hermitage, cut out of magnesium limestone bedrock & consists of the Cave, a domestic  area and a small chapel which contains the grave and altar platform.St Robert of Knaresborough was born Robert Flower in York to a wealthy family.  From childhood however he was intent on pursuing a religious vocation, beginning as a novice Cistercian Monk in Northumberland and later at Fountains Abbey.He quickly decided this life did not suit him and soon joined a hermit who lived in Knaresborough and he began to wander the area. Whenever he settled in one area he began to attract followers, many of them poor, sick or spiritually in need. His reputation as a Holy Man grew, but his lifestyle and followers earned the anger of the authorities in the area.Homeless, he returned to to the Hermit’s cave beside the River Nidd in Knaresborough where he gained more followers. Eventually , giving in to public opinion the Constable of Knaresborough Castle granted him a piece of land and he lived in the Cave for the rest of his life, with a Chapel dedicated to the Holy Rood being built by his brother nearby.Miraculous cures became attributed to him & he became the friend of the poor , prisoners and pilgrims who flocked to visit his humble Cave.He died on 24th September 1208, initially being buried in the Chapel but later his body was moved to a  Priory in Abbey Road that had been built because of his fame. In 1252 though never officially canonized  Robert was recognised as a Saint by Rome. Read more

The Half Moon Free House

St Wilfrid's, Harrogate is one of the most interesting churches in Harrogate town, and the only Grade I listed...