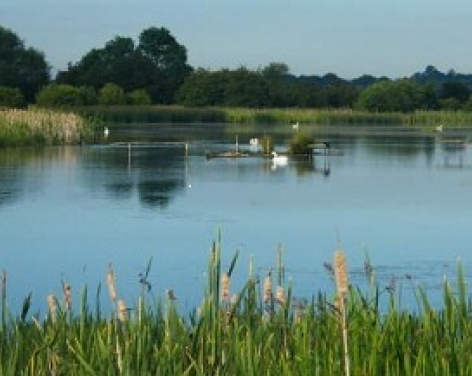 The 84 hectare Staveley Nature Reserve consists of a shallow lagoon edged with reedswamp, fen and flower-rich grassland with scrub and pasture.The reserve features a number of different plant communities, most of which can be seen from the public footpath.Over 230 plant species are found, perhaps the most noteworthy being lesser water-plantain, brookweed, opposite-leaved pondweed and bee orchid.The primary vegetation at the lagoon edge consists mainly of common reed and bulrush.In late June – early July, hundreds of common spotted-orchids grow in drier areas.Since 1974, 205 species of bird have been recorded and of these approximately 45 are known to have bred.Common breeders include both reed and sedge warbler while grasshopper warbler and barn owl breed less regularly.Throughout the winter months a variety of wildfowl is attracted to the main lagoon and locally uncommon species such as short-eared owl and jack snipe are frequently seen.Mammal records have recently included less common species such as harvest mouse and water shrew.Staveley Nature Reserve is especially important for dragonflies; 19 species have been recorded of which brown hawker is the largest regular breeder.Recent colonists are ruddy darter and migrant hawker now breeding in significant numbers.The Trust works to prevent the reserve’s open habitats from becoming enclosed woodland.Invading scrub is monitored and removed periodically.Selected areas of grassland are mown annually to encourage wild flowers.Small shallow ponds have been dug, providing a wider variety of freshwater habitats that complement the main lagoon.The Staveley Nature Reserve was purchased through the Aggregates Levy Sustainability Fund and the John Dealtry legacy, plus other individual donations. Read more

The colourful world of Jonathan Moseley

International Floral Designer, Jonathan Moseley told us what flowers mean to him.

St Wilfrid's, Harrogate is one of the most interesting churches in Harrogate town, and the only Grade I listed...