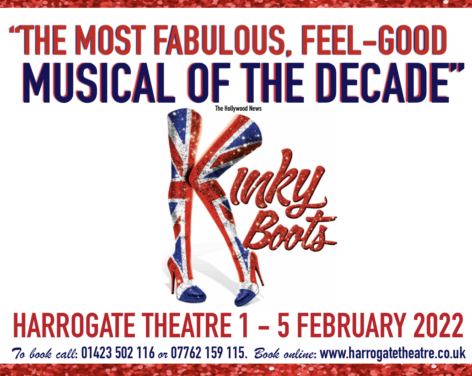 HOPS (Harrogate Operatic Players) are extremely excited to get started on our next big show for February 2022, the West End and Broadway Smash Hit musical Kinky Boots. The musical is adapted the 2005 hit movie and the stage hit has won 6 Tony Academy Awards.Kinky Boots tells the story of Charlie Price, who inherits his deceased father's business, a shoe factory in Northampton, England. He is not interested in shoes, and the factory is in such dire financial straits that he must lay off 15 employees. However a fortuitous encounter with a drag queen, cabaret singer named Lola, inspires Charlie to save the factory from closure by producing specific footwear for drag queens, much to the chagrin of the workers. The show is full of glitter, glamour, high heels, comedy, romance and catchy songs, written by the legend, Cyndi Lauper. Tickets on sale at the Harrogate Theatre, Tuesday 1st February 2022-Saturday 5th February 2022, 7:30pm (2:30pm Saturday matinee) Read more

In their 30th anniversary production, Northern Broadsides bring their bold, refreshing style to Shakespeare’s most musical and much-loved comedy...

HOPS (Harrogate Operatic Players) are extremely excited to get started on our next big show for February 2022, the...

Withering satire of faith, law and order, and the rituals of bereavement meet breakneck farce in Joe Orton’s frenetic...