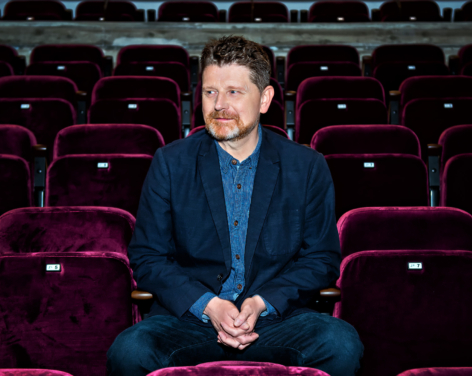 It started in lockdown as a challenge to myself. As an actor I had never felt comfortable speaking publicly unless I was playing a role, so I thought I’d face a few demons by attempting to talk live online to my twitter followers. What I discovered was, that when I got started… I couldn’t stop! Reaching the age of sixty, and having been round the block at least twice, I realised I might have a tale or two to tell.’

Reece’s Pieces… just a bloke beginning to find his voice.

A joyful evening full of stories and anecdotes from Reece's illustrious career.

Actor and Television Director Reece Dinsdale has performed extensively in theatres across the country including his role as Walter Harrison in This House at The National Theatre, George Jones in The Absence of War for Headlong Theatre Company and the title roles in Richard III and The Master Builder Builder at Leeds Playhouse. He won a Yorkshire Award for his contribution to Arts and Entertainment after playing Alan Bennett in Untold Stories (also Leeds Playhouse).

As well as his stage and big screen performances, Reece has starred in many high- profile TV dramas ranging from leading roles in the BAFTA award winning Threads and Jim Henson’s Storyteller, through Spooks, Life on Mars, to Joe McIntyre in Coronation Street and the hugely popular comedy series Home to Roost opposite the late John Thaw.

Reece recently joined the cast of Emmerdale playing the role of Paul Ashdale.

It started in lockdown as a challenge to myself. As an actor I had never felt comfortable speaking publicly...

Dead Northern is back in Harrogate with My Bloody Valentine Part II. Are you Bored of Valentine’s Day? Do...