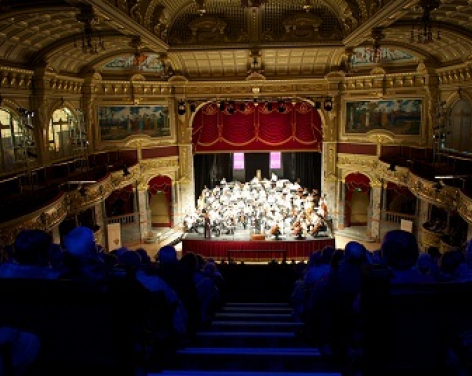 The Royal Hall, Harrogate's Kursaal, was completed in 1903, the creation of Britain's greatest theatre designer, Frank Matcham and the architect Robert Beale. Conceived and designed as a 'Cure Hall' in the great continental tradition, the building provided the major entertainment venue for the rich and famous who came to visit Harrogate and take the waters at one of Europe's foremost spas.

The building was completely closed to the public in 2001 when structural problems were discovered and remained closed until April 2008 following a major £10.8m restoration project.

The Royal Hall is now open on selected days to allow the public to enjoy the splendour of this stunning Edwardian theatre.

Guided tours are held at 11am and 2pm on each Open Day – with a minimum suggested donation of £3 per person.