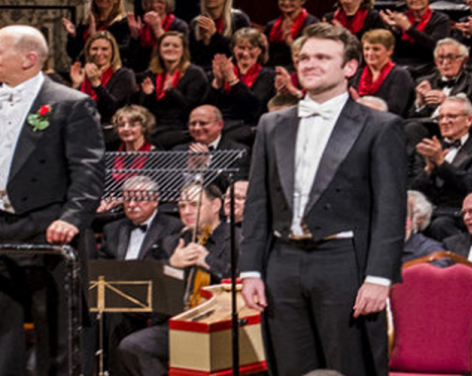 wo leading music organizations are joining forces to present a special showcase concert, which will be compèred by popular BBC Look North broadcaster Harry Gration, to raise funds for the Harrogate Hospital and Community Charity. Singers from Harrogate Choral Society (HCS) will be joined by other local singers who will all sing as "Voices for Harrogate". The concert will be conducted by Andrew Padmore (HCS Music Director) and Bryan Western (conductor of Harrogate Symphony Orchestra). The programme will feature a feast of operatic and Proms favourites as well as other popular works such as Carl Orff's O Fortuna, Verdi's Grand March from Aida, Jenkins' Suite from the Armed Man and Rutter's Look at the World. Of course the proms section will include audience participation with flag waving and hooters, making it a memorable evening for all. Read more

The show will feature the 1977 Genesis live album Seconds Out in full, plus More! Steve will be joined...

You may have heard of throwback Thursday, now it's time for the ultimate throwback decade -80s Live! Join us...

There has never been anything quite like The Red Hot Chilli Pipers, from their formation in 2002 and a...